“I ended up with less money than I started with, a credit card bill & a box of substandard products”: Inside the frustrating quest of an ex-Younique-bot

Someone asked us recently about Younique.  They felt that Younique  ‘isn’t as bad’ as other MLMs like Forever Living/Juice Plus etc because Younique doesn’t make health claims.    Well, it’s true that they don’t make health claims, but that’s because they are flogging makeup, and as far as we know nobody puts on mascara  expecting it to cure their diabetes (for example).   However, they are still an MLM with all the usual fun MLM tactics we’ve come to expect, including targeting new mums, requiring people to recruit to get up the pyramid, redirecting spending and blah etc blah.

Younique also claims to support sexually abused women with it’s own charity foundation, which makes it very appealing to many of us who would like to help our fellow women.

We have someone looking into that claim for us and will be bringing you that story later.

For now, here is the story of one woman’s journey in and out of Younique, including the usual problems with being undercut by ebay.   We’ve heard unofficially that a LOT of Bots use e-bay to offload stock & thus meet their monthly targets – all strictly hush-hush though, and they often sell at a loss. (HELLO LURKERS).

Thank you so much for coming forward, informer!  We luv u hun xx. 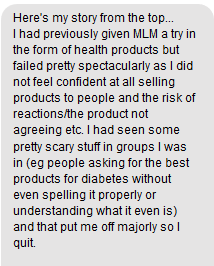 Of course there was a big fuss to get in first to be at the top….(of the pyramid – Timeless Vie)

..only 2 people ended up signing under me… 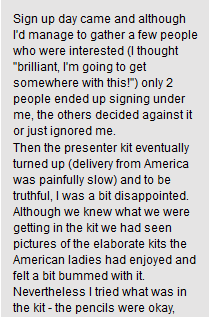 …I managed to make yellow status (the 2nd rank, £1000 in personal retail sales) 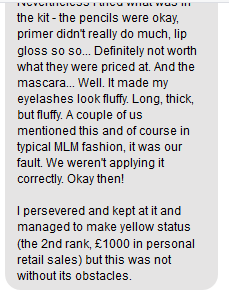 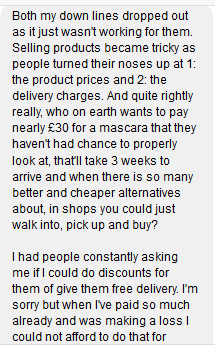 they then started with the ebay and Amazon screenshots…

Here’s what we found just now on ebay:

…no matter what level you climbed up to, at the start of every month you went back down to yellow… 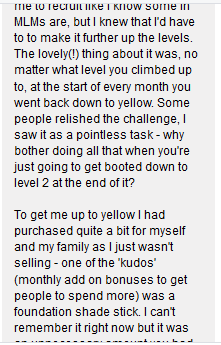 By then I’d completely had enough, I was disillusioned with the products, the company, everything

if anyone posts about makeup there’ll be younique reps crawling all over the poor poster..

I’m mega ashamed I let myself be sucked in again… 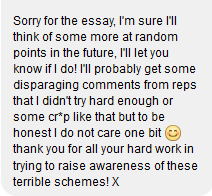 Thank you for sharing your story with us, informer.  Please don’t feel ashamed.  You never given the truth about what you had really signed up to.

More to come on Younique.

And check in tomorrow, we’ll have a special post about Jamberry in honour of their official UK launch on the 5th April!!  Stay tuned hunnis!

Posts and Pages you loved the most